The official opening time of WotLK Pre-Patch announced in the form of an announcement - August 30, and at the same time announced the specific arrangements of various activities. The eve event that the majority of TBC players have been looking forward to is about to start.

After the routine maintenance of the server, the Pre-Patch of WoW WotLK Classic will be launched. In the new Pre-Patch, the player's client will be updated to the WotLK version and allow players to create a new hero class Death Knight. Death knights will be born in the floating city in the Eastern Plaguelands and have a starting level of 55. There are no restrictions on creating your first Death Knight character.

The cold winds of Northrend began to roar relentlessly, warning the heroes of Azeroth that the Lich King and his undead scourge brought doom to all living beings. Gather your allies, stock up on supplies, and prepare for the coming threats.

With the launch of the Wrath of the Lich King pre-patch, players can create new professional death knight characters, learn new inscription skills, and experience a series of game system updates. Players in The Burning Crusade can receive the Happy Summer buff to help prepare for Wrath of the Lich King. This buff increases your experience gain by 50%! 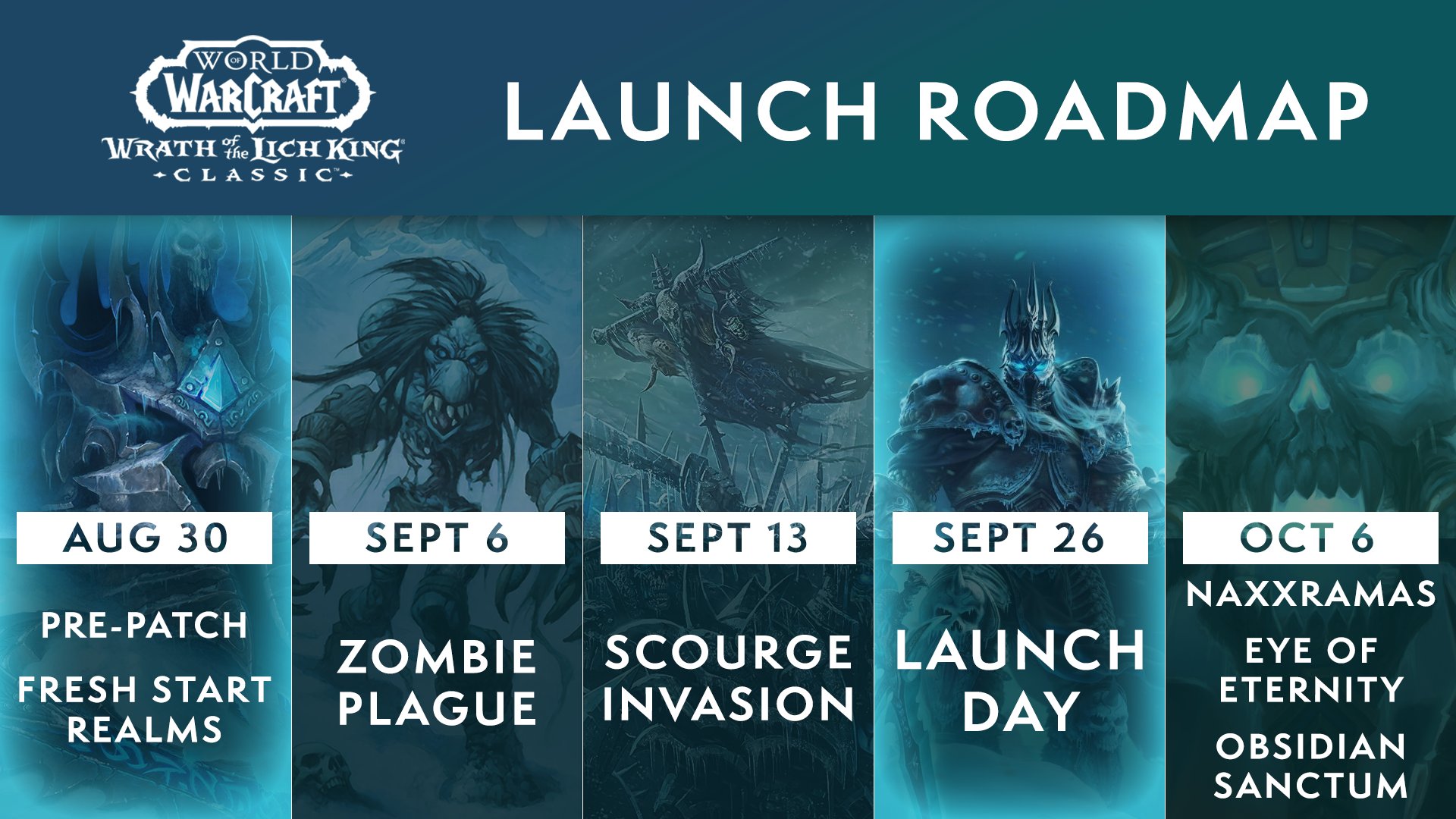 To help players prepare for the adventure, we've put together a future timeline of Wrath of the Lich King:

At the same time, 3 new servers for "Wrath of the Lich King" will also be opened. The 3 new servers are: Invincible (PVP), Frozen Throne (PVP), Lich King (PVE).

The conspiracy of the Scourge has once again attacked major cities. Players must remain vigilant so as not to fall victim to this conspiracy.

Players will work together to resist the attack of the floating city in Azeroth and defeat the Scourge troops to obtain powerful rewards.

Do you like to feast on delicious food, sip on delicious wine, and ride goats between apple barrels? Participate in limited-time events at this wine-filled festival to earn Wine Festival souvenirs and achievements.

Wrath of the Lich King Classic Launches: At 3:00 p.m. PDT, welcome to Northrend!

Season 5 will start after the weekly reset.

The giant floating city of Naxxramas is the throne of the feared lich Kel'Thuzad, floating above the Winterhold fortress in Dragonblight, seeking to aid the Lich King in his horrific plans.

The Eye of Eternity is located in the center of Coldarra, where players will defeat the blue Aspect Malygos.

The Obsidian Sanctum is located in the Dragonblight, and the player must go to the bottom of the Wyrmrest Temple to finish off Sattarion and his lieutenants, Shadron, Tenebron, and Vesperon.