​What will Beginners encounter after entering Diablo II Resurrected?

After reading the article Diablo II Resurrected: A must-see guide for beginners, new players should already know some preparations for starting Diablo 2 Resurrected. So now we will introduce to you some knowledge after entering the game for the first time as a new player.

What profession should new players choose to quickly clear the game?

Players should create a few more in the list of created characters. Based on experience, the most recommended are Sorceress, Paladin and Necromancer.

According to the recommendation of other players and my experience, if a player wants to clear the level for the first time, you should choose Sorceress first, and then mainly learn the ice skill tree. Ice Sorceress is relatively simple for new players and requires too much experience, and compared to other occupations, it does not require particularly good gear. Moreover, the skills of the Ice Sorceress will slow down monsters, as well as long-range and area damage.

What will the player encounter during the first mission in the game?

The initial place for players to enter the game is called Rogue Encampment, where you will not be attacked nor can you attack others, so you are absolutely safe here. You will also receive a prompt, the shortcut keys in the game, if you do not remember clearly, you can press the H key to view. In Rogue Encampment, you can find the corresponding person to buy new gear. The potion can also repair the gear. You can see the durability of the items by placing the mouse on the gear in the inventory. D2R Items will be damaged and cannot be used.

You can talk to everyone in Rogue Encampment, but you have to remember Akara, she will give you the first mission The Den of Evil, you need to find The Den of Evil and kill all the monsters in the cave when you walk out of Rogue Encampment will encounter monsters. Killing monsters will randomly drop potions and gears. If you see something on the ground (press and hold ALT if you have a PC keyboard and mouse, it will be displayed) and you must pick it up.

After the player's character levels up, points will be added, generally adding strength and stamina, between the points of the skill tree. The Tab key will display the map you are passing by. Go to a place that looks like the entrance of a cave, explore and kill all the monsters in the cave, the task interface will be updated, use the teleport scroll to return to the task, and then find Akara to reply to the task to get rewards. 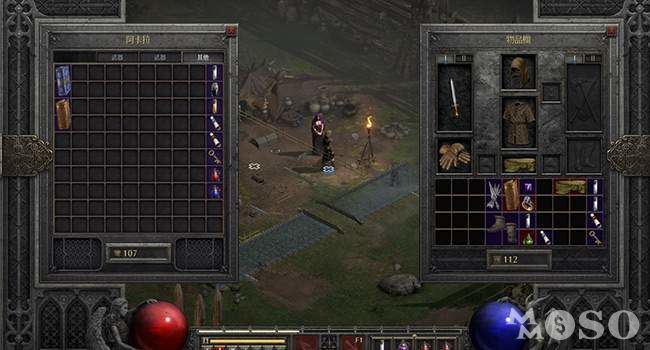 What if the new character dies?

If the player has no blood, remember to drink red water. The 1, 2, 3, and 4 buttons above the keyboard of the PC version are shortcuts for drinking water (the handle has corresponding operation methods). Remember to move the potion from the backpack bar to the belt and replenish the belt at any time On. Pay attention that if the character dies, it will spray money on the ground.

If you care about the money, you must run back to the dead place to check the corpse, or directly exit the current game and re-enter the game. The sprayed money will disappear but the corpse will be You can check back equipment directly at your feet when you appear in the village. Money can be transferred to a box in the city so that the money on your body will not be sprayed but it will spray experience points.

There are no D2 Resurrected Runes in the early game, so I will introduce it later. After the player completes the first task, he will hand over the task to receive the reward and the second task, but before proceeding to the second task, you can sort the D2R Items you get, and you can put the unnecessary items in the box to trade, buy potions and gear or sell unwanted items. Be well prepared for the next mission.